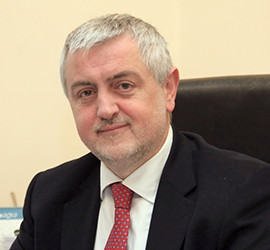 Eugenio Garavini graduated in Economics from the Modena University in 1982. He was employed by  Banca Popolare di Modena in February 1978. From November 1982 to November 1984 he was given leave of absence to participate in international co-operation projects for the Ministry of Foreign Affairs in the Central African Republic. In December 1984 he resumed his duties in various operating units of the Bank’s sales network. From July 1995 to June 1997 he was Head of the Business Affairs Department at Banca Popolare del Materano while this Bank was in the process of joining the BPER Group. From July 1997 to January 2000 he returned to the parent company first serving as sector specialist in the Sales Department, then as Head of Human Resources.

From October 2003 to September 2004 he was Head of the Consumer Division project at Banca di Sassari further to which he was General Manager of Eurobanca del Trentino S.p.A. until December 2007. He was appointed Central Manager and served as Head of Operations of BPER from January 2008 to December 2010.

He was  appointed Central Manager for the Strategies and Group Management Department of BPER in January 2011 and Vice General Manager of BPER on 10 November 2011.

Currently he is Vice General Manager of BPER Banca S.p.A.

From February 2000 to September 2003, he was Vice General Manager of Banca Popolare del Materano.

From April 2011 to December 2012 he was a Member of the Board of Directors of Banca della Campania S.p.A.

From September 2014 December 2018 he was Chairman of Galilei Immobiliare S.r.l.

He has been a Member of the Committee for Trade Union and Labour Affairs of ABI.