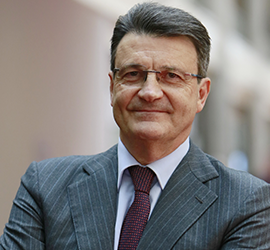 Having graduated in Civil Engineering from Bologna University in 1981, his career developed along three main lines:  as a businessman at the head of a solid industrial company, as a Director in the credit sector and as a member of associations which represent the business world.

In 1982 he joined the family business, Ing. Ferrari S.p.A. where he pursued a structured career which led him in a short time to become Sole Director and subsequently, in 1990,  Chief Executive Officer.

Alongside his entrepreneurial career he also assumed increasingly important roles within Confindustria (Confederation of Italian Industry) becoming, in 2008, Chairman of Confindustria Modena.

As regards the credit sector, significant experience has been gained during more than 5 years in BPER Banca S.p.A., starting in 2013 when he became a Director and a member of the Executive Committee.

He is currently Chairman of the Board of Directors of BPER Banca S.p.A.

Other positions currently held include: Chairman of Ing. Ferrari S.p.A.

He has been Chairman of the Board of Directors of UIMServizi S.r.l.; Chief Executive Officer of Ing. Ferrari S.p.A.; Director of GRID Modena S.r.l., Sesamo S.p.A., Nuova Didactica S.c.a.r.l. and S.A.I.M.O. S.p.A.; Liquidator of T.I.E. (Trasporti Intermodali Emilia) S.r.l