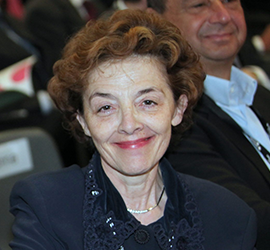 She holds an honours degree in Law from Modena University.

She is currently a Director of BPER Banca S.p.A.

She is also Chairman of the Remuneration Committee and a Member of the Nominations Committee of the Bank.

She is also Chairman of the Board of Directors of Atrikè S.p.A.

She has previously held the following positions: General Manager of the Modena City Council, General Manager of Consorzio ATCM, Head of the General Medicine Department of the Emilia Romagna Region, Special Administrator and Special Commissioner of USL no. 21 (Local Health Units), General Secretary of the Comunità Montana del Frignano – USL no. 18, Chairman of the Fondazione Museo Casa Natale Enzo Ferrari (Foundation of the House Museum of Enzo Ferrari’s  Birthplace).

She has served on the Board of Directors of HERA Comm S.r.l. and has also covered the position of Chairman.