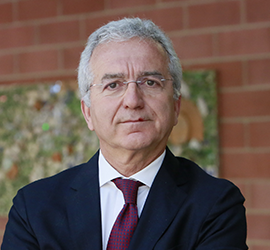 He holds a degree in Business Economics from Bocconi University, Milan.

He is a Manager in the banking field and began his career at Banca Popolare Commercio e Industria before continuing at Banco Lariano where he covered the role of Secretary of the Board of Directors.  The roles of greater responsibility were assigned at Credito Valtellinese, where he initially held the position of Head of the Business Department and Joint General Manager, as well as Deputy General Manager and then General Manager of the subsidiary Credito Artigiano in Milan. He has also been Deputy Chairman (from 1998 to 2006) and Chairman (from 2006 to 2013) of Deltas S.p.A.

More recently he has also covered the position of General Manager of Banco di Desio e della Brianza, up to  2017.

He is currently a Director and a member of the Executive Committee of BPER Banca S.p.A.

He is also a Director of QC Terme S.r.l., of Finchimica S.p.A. and of Omnisyst S.p.A.