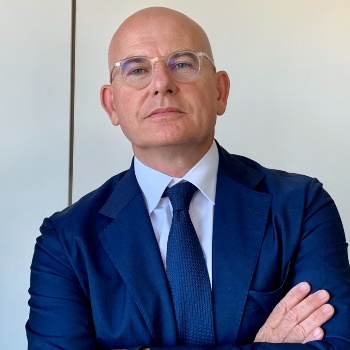 Having graduated in Economics and Trade at the University of Bologna, he has extensive and solid experience in the banking sector.

In 1996, he took on the role of Head of the Organisation and Information Systems Area relating to the sales channels of Banco Ambrosiano Veneto.

In 1997, he moved to the Cassa di Risparmio di Firenze Group heading the Organisation and Information Systems Department, accompanying the growth of the Institution through the incorporation of three acquired banks.

In 2000, he was Head of Operations (ICT, back office, real estate, organisation purchases) for the Banca Lombarda Group. In 2001, this division became a company (Lombarda Sistemi e Servizi then UBI Sistemi e Servizi), in which he took on the role of General Manager and Director.

In 2004, he was appointed as Deputy General Manager of the Parent Company (Banca Lombarda), heading the Human Resources Area and overseeing the service company with the role of Deputy Chairman.

In 2007, with the merger of BPU and Banca Lombarda, from which UBI was born, he became Chief Executive Officer of UBI Sistemi e Servizi and Deputy General Manager of the Group. In this role, he completed the distribution of the IT system and processes across all seven banks of the Group.

Since 2012, he has been Senior Deputy Managing Director and Chief Operating Officer of the UBI Banca Group with direct responsibility over Organisation, Cost Management and Human Resources as well as Chief Executive Officer of UBI Sistemi e Servizi, a position he held until July 2021, date of the merger by incorporation of the company into Intesa Sanpaolo.

In the past, on behalf of UBI, he has been Director and Secretary of the Management Board of UBI Banca (2013-2019); Deputy Chairman of IW Bank; Director of ABI (Associazione bancaria italiana [Italian Banking Association]) and member for UBI of the Trade Union and Labour Affairs Committee (2016-2021), as well as Director of SIA and CartaSi for a few terms.