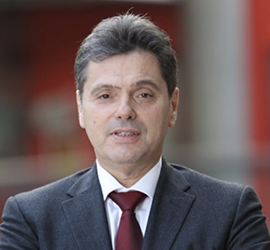 He graduated with honours in  Economics and Business Studies from Modena University  in 1984. He subsequently attended various management training courses.  He has collaborated with business associations in the publication of various research papers and has lectured at universities.

He has been employed by the Bank since 1984 where he has, over the years, held numerous top management positions: in 1992 he was Head of Budgetary Analysis in the Loans Department; after gaining experience in the branch network, in 1996 he was called upon to start up the Corporate Finance unit; in 2005 he was Head of the Equity Investments and Special Projects Function; in 2007 he took on the role of Central Manager with responsibility for the Group Strategy and Management Department; in 2008 he was appointed Deputy General Manager;  in 2010 he moved to Banco di Sardegna where he served as General Manager.  On 1 July 2012 he returned to Banca popolare dell’Emilia Romagna as Deputy General Manager and Chief Financial Officer. Since 17 December 2013 he has been a Director of BPER Banca S.p.A.

Since 16 April 2014 he has held the position of Chief Executive Officer of BPER Banca S.p.A.

He is Deputy Chairman and a member of the Executive Committee of ABI – Italian Banking Association; He is a member of the Governing Council of FeBAF – Federazione delle Banche, delle Assicurazioni e della Finanza (Federation of banks, insurance companies and finance.