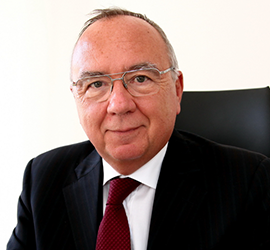 Claudio Battistella was born in Turin on 12 November 1955.

He graduated in Economics and Business Studies from the University of Turin and holds a Master’s degree in Management Banking from INSEAD, Fontainebleau.

He began his career in Arthur Andersen in 1980.  Subsequently he moved to Interbanca,  a medium and long-term credit institution where he held several roles of increasing responsibility, both in the Credit Department and in the Equity Research Department.  At the end of 1987 he joined the then Istituto Bancario San Paolo di Torino to set up the Equity Research Department, dedicated to equity markets analysis.  Subsequently he was appointed Head of Strategic Bank Holdings. In 1999 he was appointed Head of Credit Control and then Head of Critical Positions.  In 2010 Claudio Battistella was appointed Head of the Non-Performing Loans Department of Intesa San Paolo (and previously Head of the Non-Performing Loans Function).

He is currently Professor of Financial Reorganizations and Distress Value Investing at the  Bocconi University, Milan, and Professor of Company Crisis and Restructuring at LUM – Jean Monnet University, Bari.

In 2015 he joined the BPER Group as Chief Lending Officer – Head of the Group Loans.

Since 1 January 2016 he is Deputy General Manager of  BPER Banca.

In the past he has held similar roles related to his previous positions.